Where did the bitumen come from?

Maybe you’ve seen one of the many memes depicting the source of oil as a dinosaur farting underground.
Or one pondering, “If plastic is made of oil, and oil is made of dinosaurs, are plastic dinosaurs made of real dinosaurs?”

Who discovered decomposed dinosaurs are the source of oil? Let’s look at the “Dino Theory.” 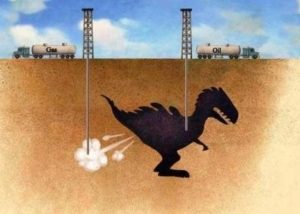 Well, the entire idea actually came from a very bright advertising campaign;
one so successful the company even adopted a green dinosaur themed trademark.

Around 1930,
the American company Sinclair Oil made the connection between oil and dinosaurs;
for no scientific reason at all!

Both simply “happened” a long time ago…

…and the “Dino” ad campaign was so successful
it is still being used almost 90 years later!

But…Dinosaurs are definitely not the source of the Oil Sands!

A long, long time ago, the earth’s atmosphere was rich with carbon dioxide gas.
Shallow seas covered a lot of the modern landmass.
Most of today’s Canadian prairies were under a warm inland sea teeming with bacteria and other tiny organisms.

But this was only half the story…
…just as important was that the organic material was buried and protected from destruction due to
biological decay caused by reaction with oxygen!

Layer upon layer of sediments built up, with each new layer adding to the pressure being applied to lower layers.
This eventually transformed some sediment into rock.

But some organic sediment was transformed into petroleum compounds.
The natural reactions that created these compounds can only occur in the high heat and pressure conditions found deep underground.

Geological and climatic upheaval reformed the land over time, stripping away upper layers and exposing petroleum laden layers.
Much of the low density petroleum compounds evaporated into the atmosphere. This left behind thicker petroleum compounds that
seeped into deposits of mostly quartz sand. The mixture of quartz and petroleum formed the bitumen we find in in the western formations.

In case you’re not convinced, let me try to add this up for you….

First, there is a lot of petroleum in the western Canadian formations.
Let’s round it down to 160 BILLION barrels of proven reserves in Alberta alone!
With an average weight of 138 kg/bbl., this is over 22 TRILLION kilograms of oil.

If we simply convert matter (using as much science as the dino ad campaign), this would require an equivalent weight in source material;
or around 400,000 dead dinosaurs, even if the average dead dinosaur weighed an astronomical 50 tonnes! (which most didn’t)

But the question is, “How was contact with oxygen prevented?”

As soon as each animal died, it had to be buried to keep it away from oxygen (and not be eaten by scavengers).

Could natsedimentation cover entire animals fast enough, or could only tiny organisms be trapped in the quantities needed to create the oil sands?

Unfortunately, when we consider how to naturally trap a dead dinosaur in a layer of sediment, the “Dino Theory” breaks down.

To find out more about how the Canadian Oil Sands were really formed,
you can view the Hydrocarbons chapter of  Contendo’s SAGD Oil Sands Online – Well Pads Course.

Kevin Fox is a senior technical writer at Contendo.
He is a power engineer who has written process education programs for industrial clients since 2009.

Time is running out for Flash!