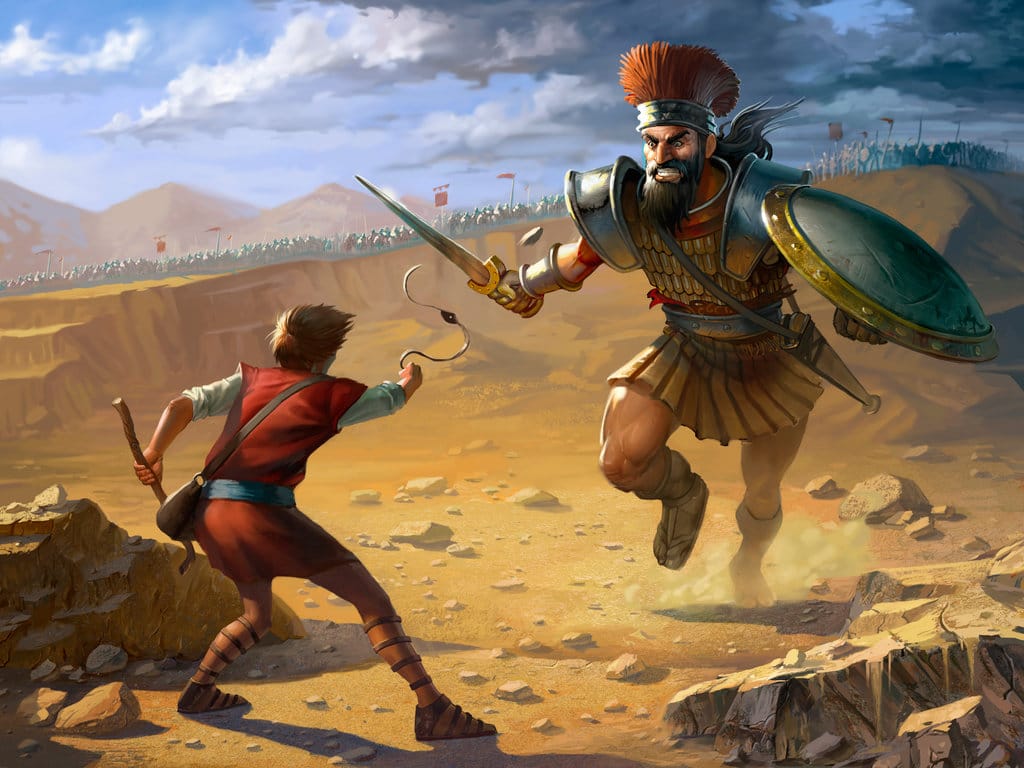 Change the game, defeat the giant.

The Cost of Competing

Here at Contendo, we have two offices. One being in North East Calgary and the one where we do the bulk of our work is in Belledune, New Brunswick. I love my community and could describe it to you, but in reality, it is much the same as most small communities in North America. It could be a small town in rural Ontario or Iowa; the issues are shockingly similar. The evaporation of a traditional industry that used to support the local economy an aging demographic, a decline in the number of families having kids, and an exodus of young talented professionals to urban centres.

Those issues are in turn starting to trickle down into the cities as well. We see the ever growing competition for talent inside the Calgary market, coupled with the decline of certain industry sectors means that becoming and remaining competitive in various market segments has become even more challenging. So, how is it possible for small companies, communities and even economies to continue to play the game when they keep getting pushed out by big stack giants,  we have some ideas.

The Common Response / Feeding the Giant

Unfortunately, most of us have the same response to greater market uncertainty. We usually eliminate any of the activities that differentiate us from the competition i.e. research and training projects, corporate outings, capital investment, continual improvement, etc. I should qualify Continual Improvement, for the most part, doesn’t disappear within organizations in bad times, it just gets redefined as cost savings or reorganization.

If we look at the traditional album based music industry, the late ninety’s pretty much was the beginning of the end with P2P networks like Napster among a slew of other torrent and illegal download sites coming out of the woodwork. Heavy Metal giants Metallica even sued Napster in 2000 over the proliferation of illegal downloads of digital music. They won, but in the wings, a sputtering innovator saw the trend and realized it was inevitable. Thus, iTunes.

It may seem a bit abstract for an e-learning company, a printing house or even a landscaping company to draw a direct connection with; however, the established music industry’s response was much the same as most small businesses, communities or regions. A perceived threat approached (proliferation of digital media) that threatened the traditional market cycle, so the reactions were swift and predictable:

Aside from the condemn step, many businesses follow this pattern.  Telecomms reluctantly started releasing skinny packs while decreasing the amount of original content they produced over the past years in response to the rise of streaming services. Meanwhile, Netflix and HBO Remain the most sought after subscriptions in the world, because they adapted and invested more.

McDonald’s is an interesting case of a company taking one step forward and one step back. On the one hand, they have eliminated the need for cashiers substantially by installing these self-serve kiosks. However, they have also begun stepping up their game regarding the number of specialty items they serve and have on their menu. So on one side of the equation, they have found a way to save money by cutting back on cashiers, but now require de facto Barristas and more cooks and kitchen staff. They have enjoyed a bit of a resurgence in the market place. Sadly, this moderated approach is not the norm. 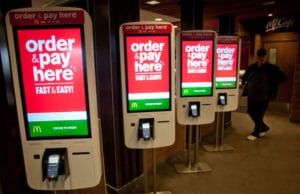 Loblaw Companies Ltd. stated recently that proposed changes to the minimum wage (i.e. a $15/hr) in Ontario and Alberta would increase their labour expenses by $190 million. As a result CEO of Loblaws (Superstores, Shoppers Drugmarts, etc.) Galen Watson responded by stating that to combat these rises in operation costs we would see, ““increasingly digitizing manual invoice jobs and rolling out more self-checkouts at its Shoppers Drug Mart locations.” Loblaws is not a small company, nor do they suffer from a lack of skilled people making these economic decisions. If this is their response to incoming market challenges, how can we possibly be blamed for doing the same thing? We believe that at the core of this reactionary protocol is a fundamental conflict around how these businesses view themselves and their model.

It can be as simple as the format upon which they build their business models. The two business planning tools below should look familiar. One is the SWOT Analysis, and the other is the Business Canvas. Both are used to help develop business plans and strategies. The fundamental difference between them, however, is that while one primarily makes you look outside of your organization for answers (SWOT), the other requires you to refine your understanding of your internal operations.

One of the main reasons that the Business Canvas has become so popular, especially in small business and startup communities, is because it focusses more on the aspects that you can control. A robust and refined business canvas and full understanding of all of the relationships and interdependencies within the Canvas has the natural effect of providing the business in question with a much greater sense of exactly how their business is doing, what areas they are struggling in and which areas need to be enhanced. The SWOT, on the other hand, likes to play into an adversarial approach to doing business and one that certainly feeds into a system where the Big Stack always wins. For example, here at Contendo, we create great online learning modules and web based software, we see it as a strength. If we were strictly beholden to the SWOT way of thinking, we’d never make any of those products. We’d immediately look at our Threats and Weaknesses and see that with market giants like Microsoft, Oracle, Brightspace and come to the conclusion that the market just has too many threats for us to compete successfully. If we toss the SWOT and decide to focus on the Canvas, we can build a strong business case by just refining our internal game. We are always working to get it to the point that we have carved out our market and then begin to gnaw at the shins of the giants (well that’s the dream). For the rest of this post, I want you to think about your business, community or whatever organization you’re in to focus on the values found inside the canvas.

It’s reasonable to assume that by making cuts to non-essential activities such as research and development, employee development, bonus programs, or continual improvement that a company facing a significant outside threat may be able to sustain themselves, for a while. Poker is a great metaphor for this part of the post. When you are small stack at a table you are forced to play smart, all the while, you are obliged to watch the more successful players at the table pick up easy hands. These big-stack players do this merely because they have the ability to invest enough into the pot to make it too risky for others to call. This cycle has two unfortunate results for the small stack players; they continue to bleed chips via blinds until they are forced to go all-in, often not at the most opportune moment. At this point, it is a pure gamble that they will survive these heads up battles. It’s a system that heavily favours the established giants.

So, how does one defeat a giant? At Contendo we looked at a bunch of different methods. We operate our production house in Northern New Brunswick, which has significant cost savings compared to the operations of the main metro centres. There are costs associated with reaching the market, but those offset fast once you procure work. To be honest,  the best advice we can give and have gotten is that we stopped playing the game by the giant’s rules.

The moral of the story that Malcolm Gladwell tells us, that in the case of the most famous giant slaying of all time, David refused to do what Goliath expected. That’s what we like to do here at Contendo, and what we like to help our clients do. Yes, we have off the shelf training, but that just fuels the customized software and training products that we produce. We have customers who identify aspects within their standard operations that needed to be improved or could prove costly if performed improperly. Instead of cutting back or simply trying to reduce the cost of those activities they decided to invest in custom training that would enhance the ability of their employees to perform. By investing into the strengthening of their Key Activities (see canvas above) they all have been able to operate at greater efficiency and with less down time. The windfall of which has helped them combat external threats such as market downturns, and allowed for further reinvestment into strengthening the activities found within the Business Canvas.

We have had the privilege of working with Fortune 500 giants, startups, public organizations and a whole host of organizations and businesses in between. One thing to be sure of though is no matter how big you get; there is always a giant. So, what have we learned? What knowledge can we impart to you?

“Be Agile and Sure Footed”

Whether you’re David from the old testament or an online solutions company operating out of Northern New Brunswick, the dynamics are the same. Agility will allow your organization to shift its focus to maximize your competitive advantages. It will also enable you to move faster than the giants that you fear will trample your business. It also allows you to walk away from a table at which you no longer have the advantage. That’s why custom building your solutions is so important, it’s hard to get Microsoft to turn their boat around for a company of a hundred employees, but if your solutions are built to the purpose, it’s much easier. These tenants are nothing without having solid footing. Look inward, create your canvas. When you do, you’ll see the weaknesses that could harm your business model or your ability to compete. Invest in your key activities that can mean capital, but it will more often mean the people performing these activities.

David had the sling, but he also needed the skill and confidence to walk into the Valley of Elah and use it to kill a giant. Just like everyone in your organization needs both the tools as well as the knowledge and confidence to use them.

So we’ve reached the end, well the end of this post. It’s been a bit of an adventure, and we hope that you may have gained some new perspectives about how you can redefine the game that keeps all of us non-giants up at night. We’ve seen countless examples of how outside threats have triggered a response of cuts and clawbacks, and for the life of me, I could not find any examples where those actions lead to that brand coming back stronger. That is quite simply because it doesn’t work like that. Sears is not going to retake the Canadian market place by closing half of their stores and laying off a tonne of great people. That isn’t to say that they won’t eventually rebound, but it will be on the heels of an investment in innovation and a shift in direction or a substantive change in the game that they are playing.

So, if you want to discuss a few game changing ideas that you have, whether you’re a business owner, community leader, or just like us, enjoy the idea of taking on giants, please feel free to give us a call. Maybe we can help, maybe we can’t, but the best part for all of us, especially small to medium business owners is that we are not like David, we don’t have to take down Goliath alone.

Kevin’s Blog / Does Your Resume have You Covered?