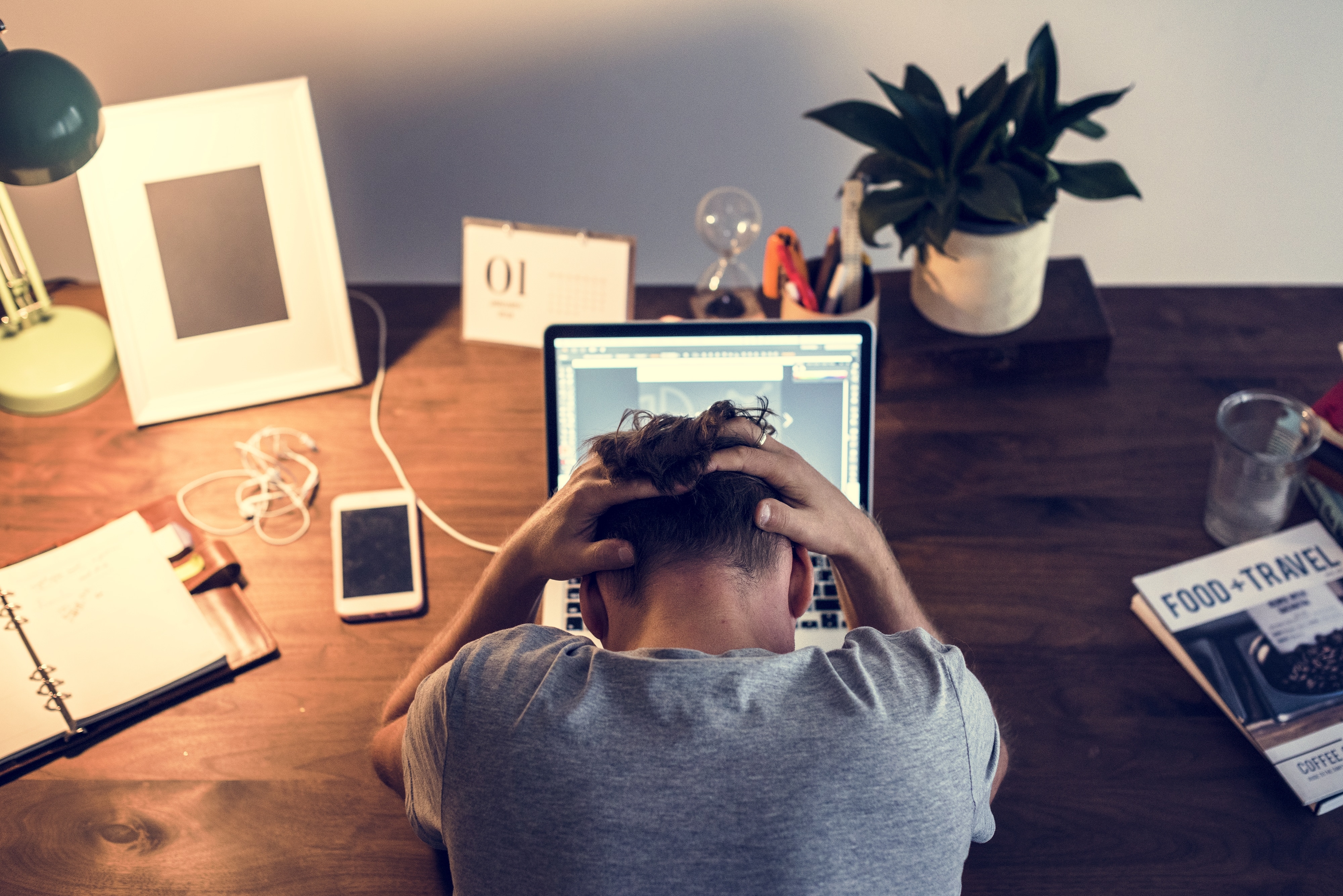 Man stressed while working on laptop

Today in Sandenn’s blog we are going to investigate what it is like to get buried under a mountain of your own creation. In business as well as in community and your own personal life it is very easy to get bogged down on the multitude of little tasks that neither bring you joy or profit. This isn’t a new phenomenon, nor is it unique to one sector more than another. The terrifying truth of these little time thieving, joy crushing tasks are that a lot like another substance you don’t want to deal with, there is a constant supply. Even worse we actually go out of our way to make sure that being buried by these tasks never changes. Today’s blog looks at the psychological factors that contribute as well as the consequences of inaction.

A few months back…

In May of this year, I delivered a keynote to a group of municipal administrators in the Province of New Brunswick. The name of the presentation was Innovation and Community: Or How I Stopped Fearing Change and Learned to Love Innovation. The keynote didn’t go as well as I had hoped, It was unclear exactly how much time I had and the exercises I wanted to complete never happened. The core message I was hoping to deliver to my audience was simple, “By embracing change and innovation, we can improve not only our lives but those whom we serve as well.”

Innovation and Passion: Or How I Stopped Fearing Change and Learned to Love Innovation from Sandenn Killoran

The difference between insanity and self-punishment

Throughout history, change is rarely readily accepted. Whether it was the acceptance of technology, social changes, new people into our lives, new ideas have always faced harsh and often, great scrutiny. Take for example the case of Galileo:

As you can see from the adorable video above, changing someone’s mind is never an easy task. The scientific method, perfected by Galileo, forms the basis for the vast majority of the advances in science, society and technology that we enjoy today. So, why with the apparent value of being receptive to change and innovation do we still hold fast to processes and practices that stopped being both efficient and effective long ago?

The reason is that as human beings we are primed to fear sudden shifts in the equilibrium of our environment. Whether it’s our workplace, our community or even the universe we are skeptical and downright resistant to change. This resistance is large part is evolutionary and due to a psychological effect called priming.

Primed for Action or Inaction

We all want to feel confident and believe that we are innovative, bold and ambitious. But for the most part, we are programmed to fear the unknown, avoid risk and repeat a problematic task without question rather than upset the equilibrium that our primed subconscious brain prefers.

Think of all the jobs at work and at home that you do every day or at least regularly. At one point you’re told that “this is your job.” As a result, you are now protective of this task, even though it burns countless hours, is crushing your efficiency and effectiveness in your role, you, along with most humans, will defend the status quo of having to do this task with great enthusiasm.

How this tracks to business

Take this priming to a community level. A lot of communities, especially rural communities, are facing severe economic situations. A decline in youth population mixed with fear and priming of an outdated model of economic development has led not only to continued decline, but it has led to accelerated deterioration due to resistance to substantial and impactful reprioritization and direction. How many of you can say if only we invested in Apple twenty years ago? The truth is that you could have bought Apple when it was bottoming out, but as humans, we are primed to avoid risks like that. It’s not only understandable, but it’s also predictable. The same goes for businesses and communities.

In another post in Sandenn’s Blog we explore liking the grind, and how that can be freeing. This is not the same thing. We are primed to like equilibrium and these tasks that we won’t let go of, they are often just time thieves, not difficult to complete, but time consuming. It is critical that we recognize the difference between choosing to struggle for something that makes us better versus something that keeps us safe.

The Great London Manure Crisis of 1884

Of course, the great danger of failing to change or innovate, whether it’s personal development, business practices or community direction, is that you will eventually allow all these issues to compound and bury you.

The best example I can think of is the Manure Crisis of 1884. The Industrial Revolution was in full swing, and people were flocking to the cities of the day. Of course, at this time more people meant more horses. And more horses resulted in more.

Forecasts decried that if something didn’t happen to alleviate the amount of excrement coming into the cities, London would have streets with nine feet of manure on them. Beyond just the inconvenience of having that much crap to deal with, excess excrement was causing disease, water issues, and of course smell related illness and troubles.

Why did we never reach the point of manure armageddon? It was the car that saved us from that smelly fate. With the invention of the automobile and its evolution, horse manure, as an issue, disappeared.

The moral of the story is that there are problems that you should not suffer through. What if the automobile hadn’t come along? Even worse, what if there had been the same resistance to it as we have to change nowadays? It isn’t hard to imagine that we could be that stubborn, you need only to look at the climate debate.

Now cars and carbon are the issues, scientists have predicted what will happen to us if we don’t change our ways, it seems that 9 feet of excrement are a more convincing set of consequences than the ice caps melting and superstorms.

So why are you allowing your business / community to get buried?

If we bring this back to a business level, we still see significant resistance to change in our offices and worksites. We are, for whatever reason, content to allow ourselves to get swamped in tasks or obligations that can easily be automated or lessened with technology, due in large part to that innate desire to maintain equilibrium with “the way things have always been done.”

Leaders, on the other hand, invent the car. Leaders, automate to focus on being effective, rather than just efficient. It is the job of a leader to look past the priming, invest in Apple after the Newton. It isn’t easy but as a leader in your community, business and especially in your own life, it is your responsibility to make sure that you don’t get buried alive in a pile of manure.

Ps. this wasn’t my original analogy, I just took it and ran with it. Thanks, Jared and Silicon Valley.

Kevin’s Blog / What a Relief

Golf Day with the Contendo Team – Tips from a Pro